4 Tips For Getting Design Proposals Signed Faster
10 Things to Do After Installing Windows 11
Exciting New Tools For Designers, February 2022

The Nothing Ear(1) offers a refreshing take on minimalism and simplicity, but it seems that it took simplicity to the extreme. Thankfully, the price tag makes some of its shortcomings a bit more forgivable.

Although there have been Bluetooth speakers, headphones, and earphones long before it, the Apple AirPods truly started a new chapter for the audio equipment industry. Truly Wireless Stereo or TWS earbuds started becoming more prevalent and, unsurprisingly, started to look a lot like one another. Many laughed at the AirPods’ unorthodox “stem” when they first came out, but it is now one of the most copied earbuds designs in the market. That state of affairs inspired a former smartphone company exec to strike off on his own and build a company on a theme of transparency. It’s against that backdrop that the Nothing Ear(1) was born, and we tried it out to see just how far its clarity goes. 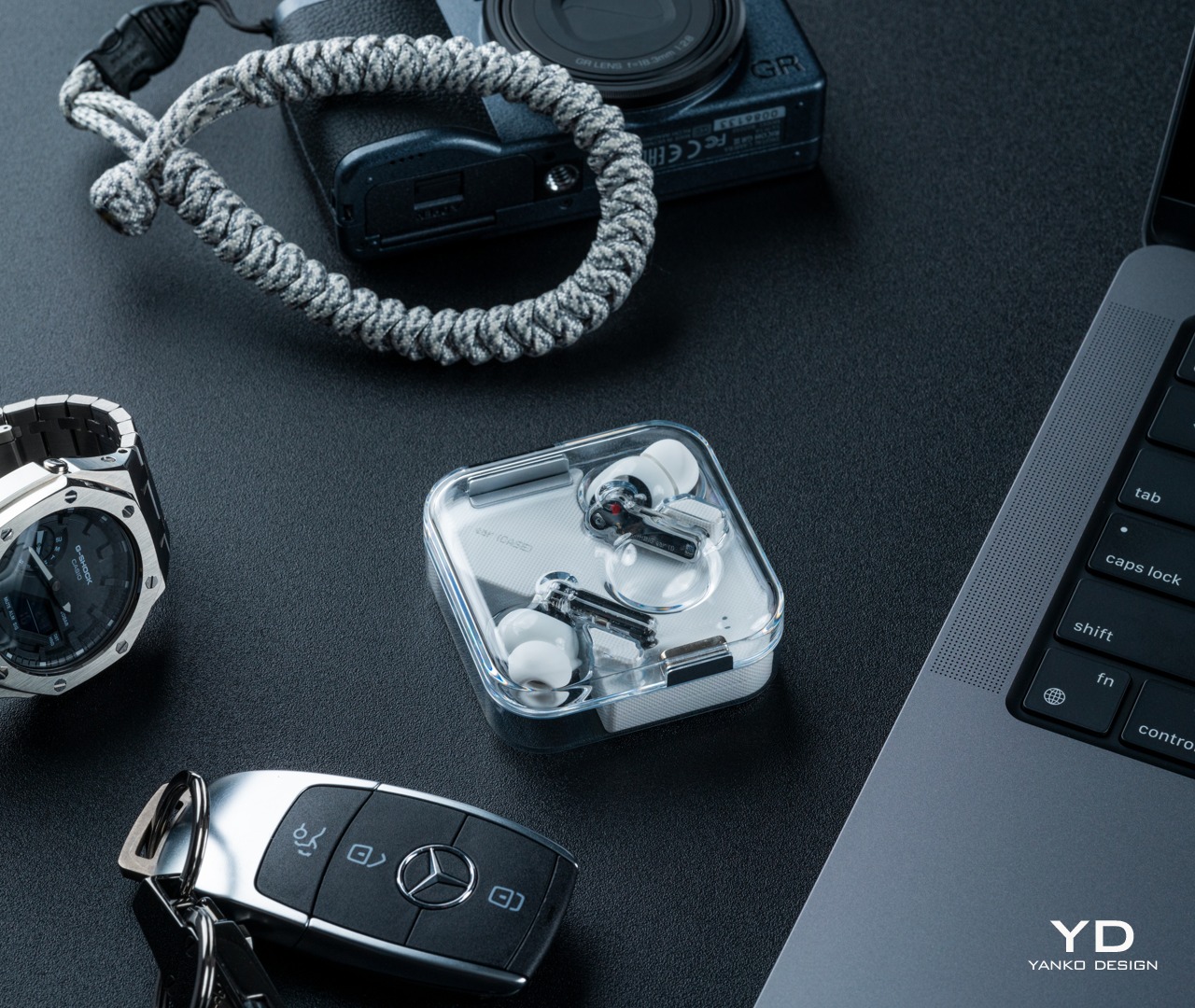 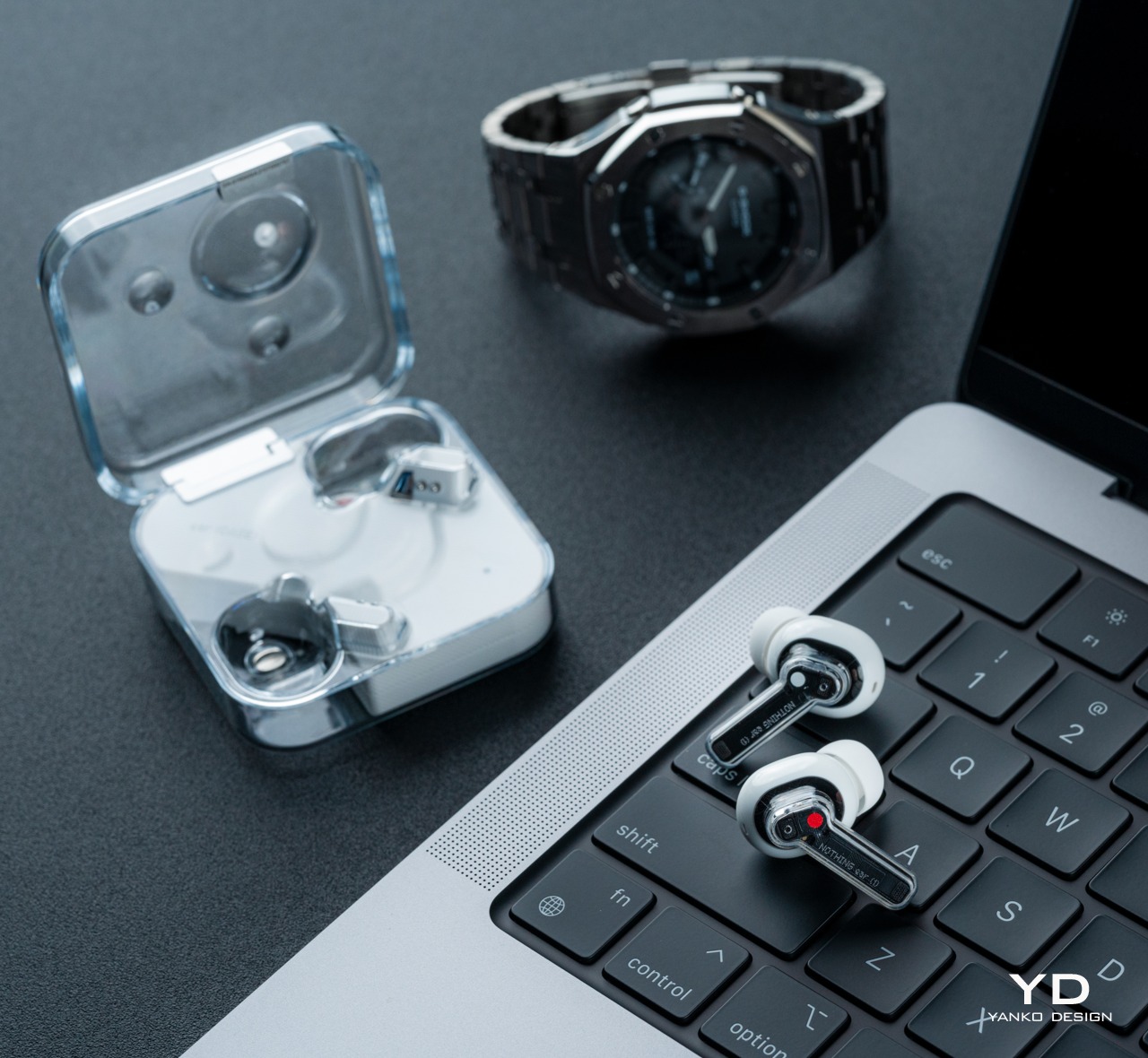 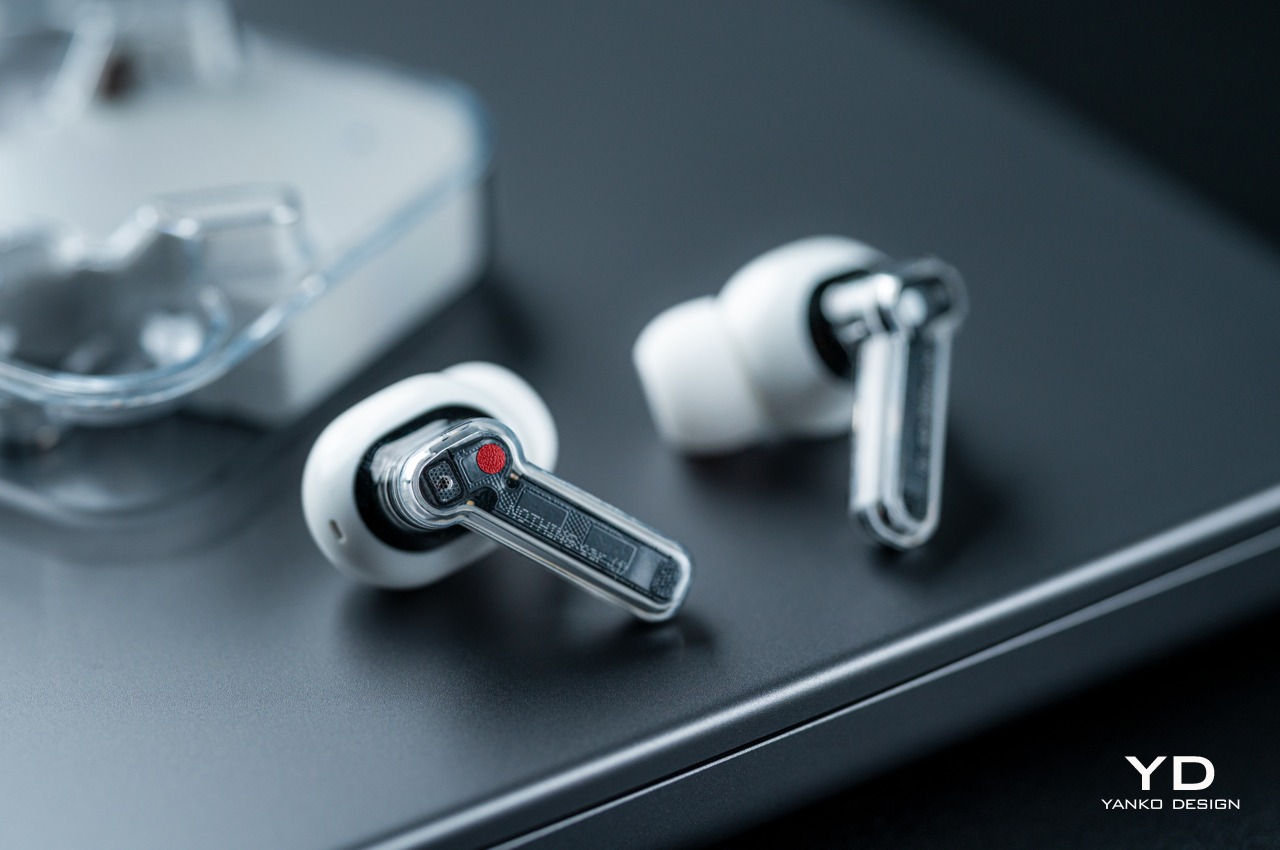 Nothing co-founder Carl Pei wanted to introduce a niche design trend in the mobile market starting with the Ear(1) buds, and he does hit the target, though only barely. There is already a sub-trend in minimalist design circles that call for transparent frames and chassis that reveal a product’s internals in all its glory, and it’s something that even tech-loving people fall for. Phone skins that fake a transparent back are quite popular among this crowd, and there are even one or two phones that deliver a translucent design for these people.

Unfortunately, the Nothing Ear(1) isn’t really completely transparent. In reality, only the buds’ stems let you see the minute electronics inside, from the microphones to the sensors to even the magnets. The buds themselves, particularly the part that houses the speakers and the battery, is completely opaque to the outside world, shattering any expectations of a fancy view of what makes a wireless earbud tick.

More disappointing perhaps is the Ear(1)’s charging case, which shows off no electronics at all. Yes, the cover and base are transparent to let you see the buds when they’re nested inside, but that’s pretty much it. At least you won’t be caught by surprise when you notice that one bud is missing from its cradle.

The Nothing Ear(1) is definitely aesthetically interesting, but it’s just a few steps away from feeling a tad too gimmicky. In terms of the overall design, Nothing doesn’t really offer anything revolutionary to set it apart from the crowd. Without those transparent stems, there is really nothing to keep it from being mistaken for the Apple AirPods Pros. 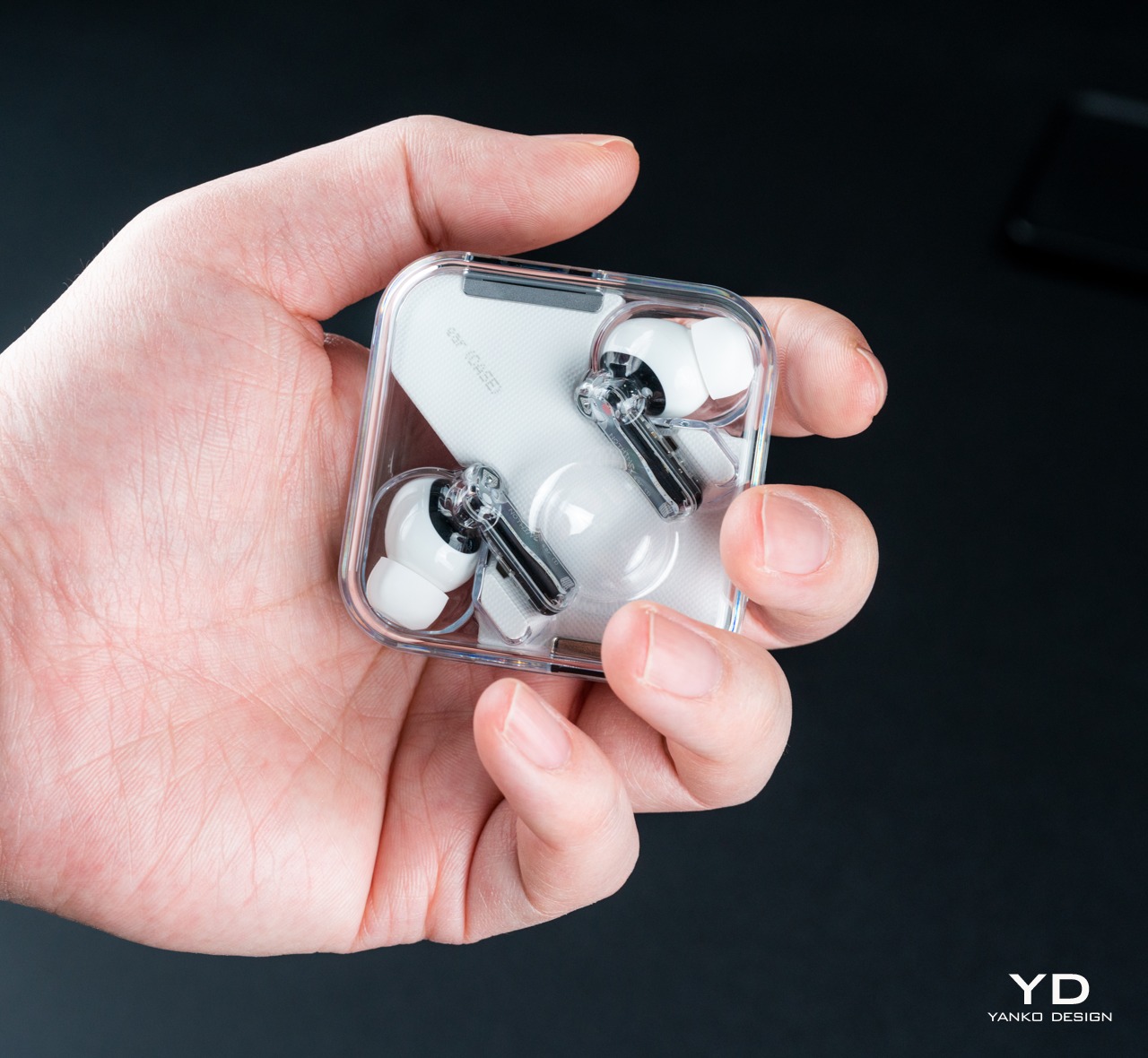 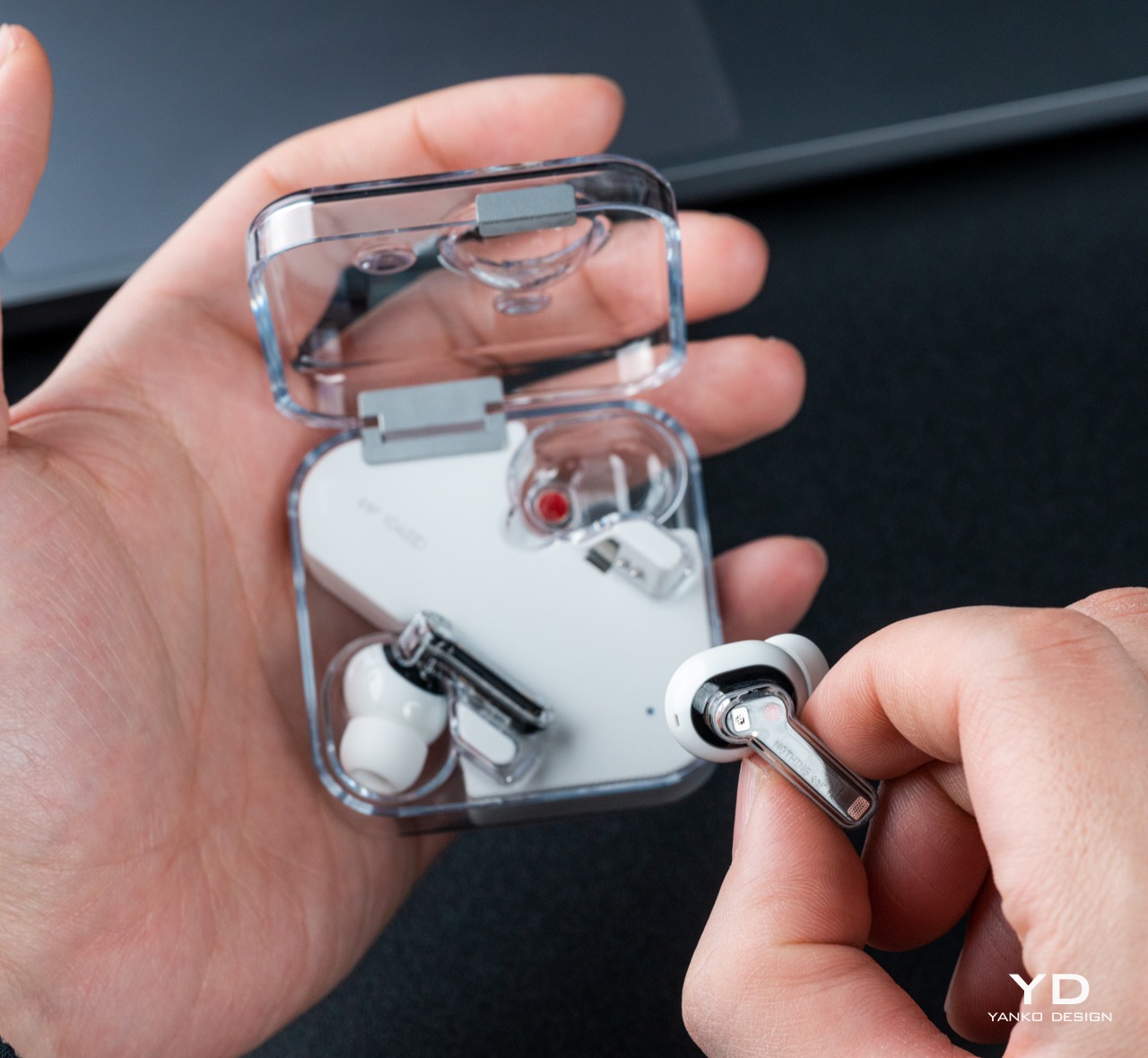 Fortunately, the startup doesn’t disappoint when it comes to the feel of the accessories. As something that most people will put in their ears for hours on end, comfort is one of the most important design considerations, even for tiny TWS buds. In that area, the Ear(1) definitely delivers.

The buds offer a comfortable fit, and the three different silicone tip sizes ensure they won’t accidentally fall off when you’re sweating it out. It’s almost too easy to forget they’re even there, given how light they are at 4.7 grams. Of course, that’s an exaggeration because you will always notice them since you’ll be enjoying your favorite workout tunes or podcasts while wearing them.

The Ear(1) does support that exercise scenario but be careful not to go overboard. An IPX4 rating means it’s minimally water-resistant, at least against some accidental splashes of water. There is absolutely no protection against dust, so forget about bringing it to the beach unless you’re very, very careful. 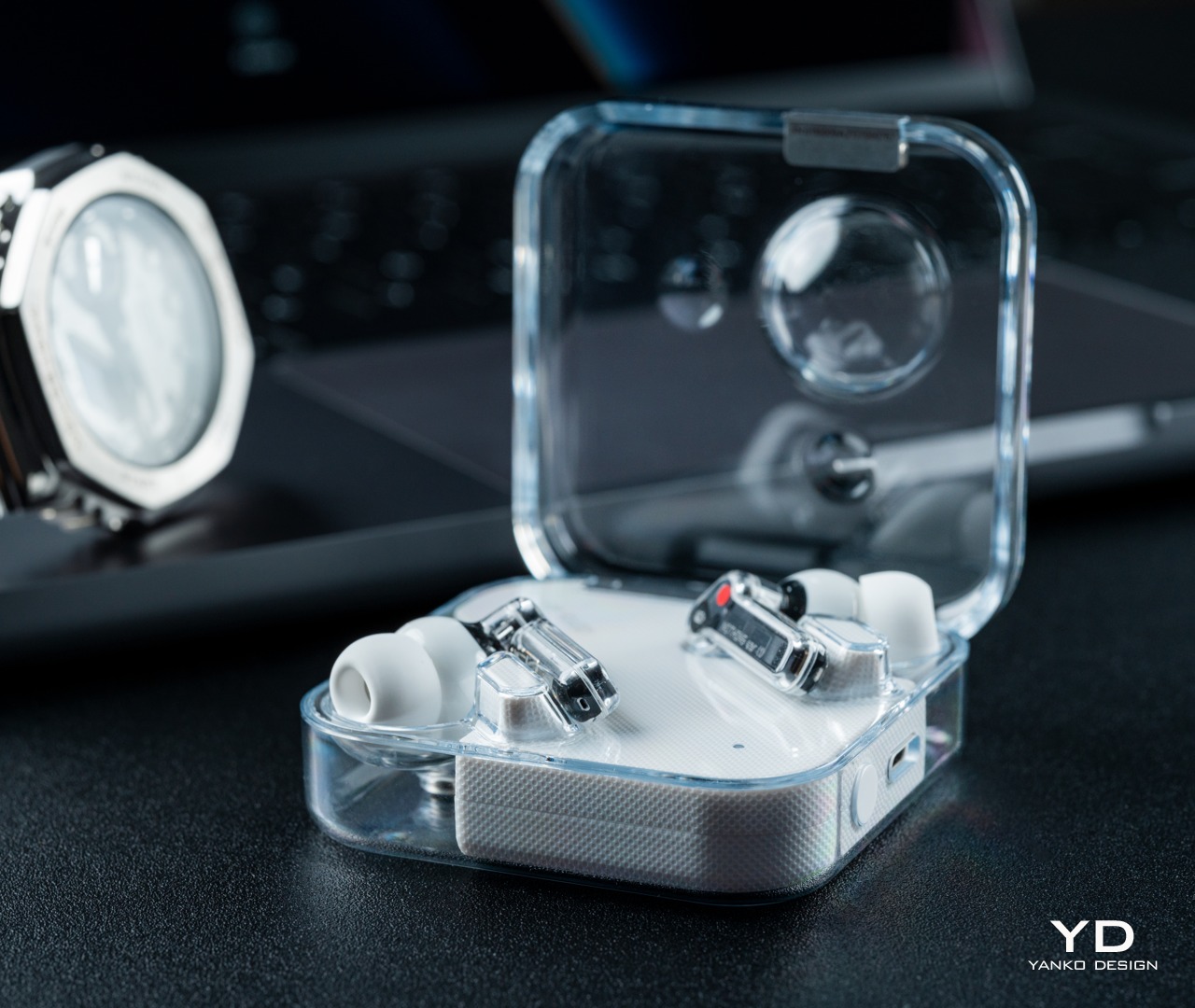 Nothing wants to reinvigorate and revolutionize the consumer tech market, but it has so far failed to address one of the biggest problems with that industry. Earbuds, in particular, are the epitome of unsustainability and electronic waste, and the Nothing Ear(1) is no different. Despite claims of its durability and longevity, the buds will eventually break. And when that happens, there’s really not much choice but to throw them out.

Despite its unconventional transparent design, the Ear(1) is 100% conventional when it comes to the materials used for its construction. That translates to a lot of plastic, and not even the recyclable kind. Given how earbuds like these are often lost or aren’t exactly long-lasting, the chances of a pair finding its way to landfills will happen quite often.

It wouldn’t be as bad if the buds were easily repairable but, then again, almost no TWS earbuds are. They are extremely difficult to open up, and their soldered parts make it impossible to replace broken components. No wonder, then, that repair expert iFixit gives it its lowest score.

The one silver lining is that co-founder and CEO Carl Pei is well aware of the sustainability concerns hounding consumer electronics and is promising to work towards fixing that as well. He said that the Ear(1) would be carbon neutral in its production by the end of last year, though he stopped short of explaining the steps the company has taken to achieve that. That, however, still leaves the question of the materials used, and that will probably be more difficult to address than carbon emissions during production. 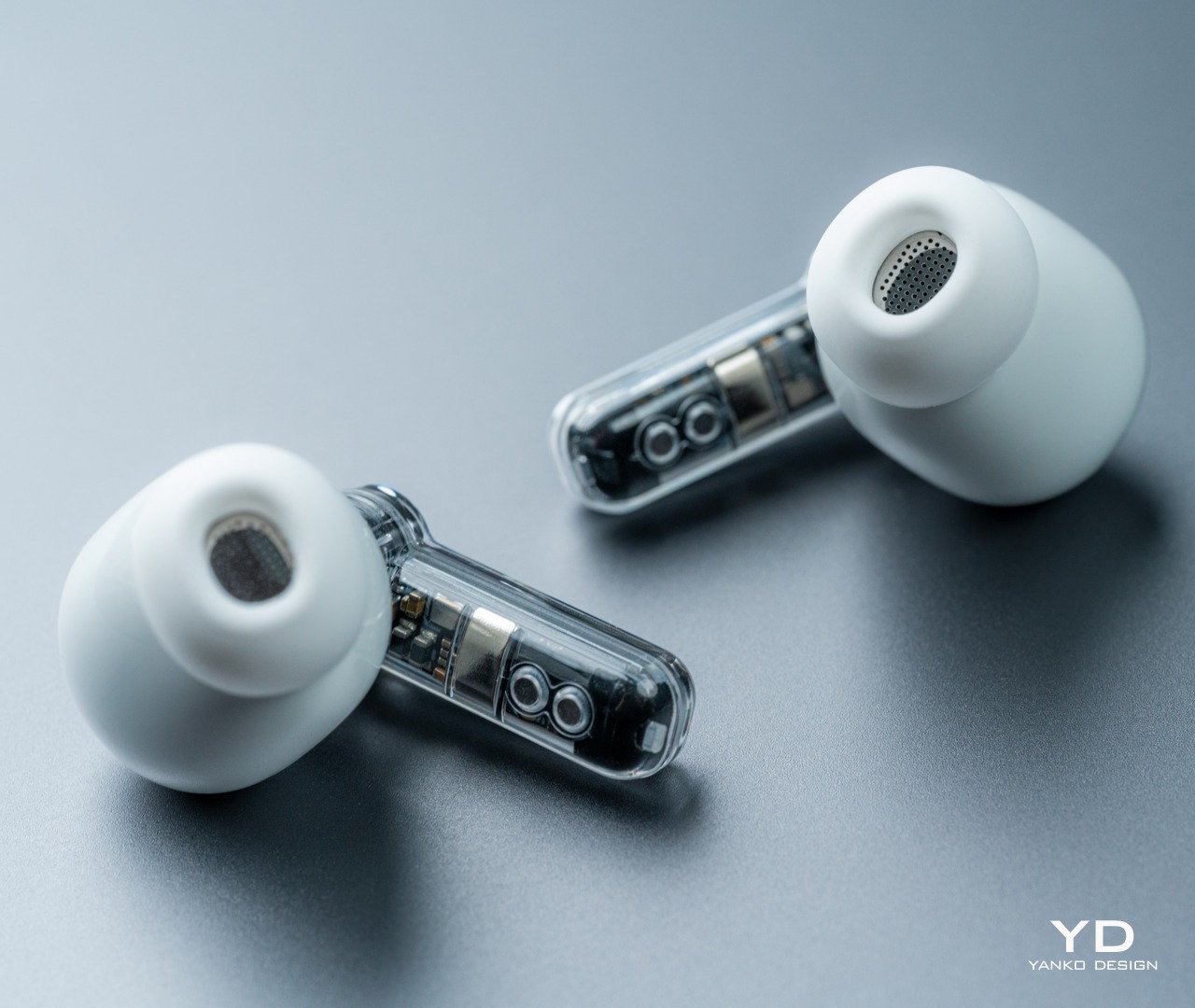 It’s almost too easy to write off the Nothing Ear(1) as some fancy buds with an artsy gimmick and nothing more. With the price tag it carries, not to mention the age of the company, it’s also too easy to presume you’ll be getting what you pay for. The surprising reality is that it isn’t the case at all.

We could hardly describe the Ear(1)’s audio output as mind-blowing, but it’s definitely unexpected for something in this price range. Mids and highs are clear and discernible and bass is present, though definitely lacking in punch. The companion mobile app offers some equalizer presets to swing towards more bass or more treble, but those won’t really do much to compensate.

The buds are actually feature-packed, which is another surprise given that same price tag. There are touch gesture controls that are somewhat configurable via the mobile app and automatic pause and resume when you remove or put on the buds. The biggest feature, however, is the presence of Active Noise Cancellation, something that you’d only typically see on more expensive pairs. Sadly, ANC performance isn’t exactly impressive, and there’s still a good amount of sound that gets through.

With that many features, it’s almost disappointing to discover that the Ear(1)’s mobile app is almost the exact opposite. Going for simplicity, it doesn’t offer much control over the buds. You can change some of the touch gestures, sure, but you are forever stuck on the EQ presets that Nothing has provided. The buds themselves also lack some high-end features like high-quality aptX codec and Bluetooth multi-point, but some might consider those as luxuries rather than essentials. 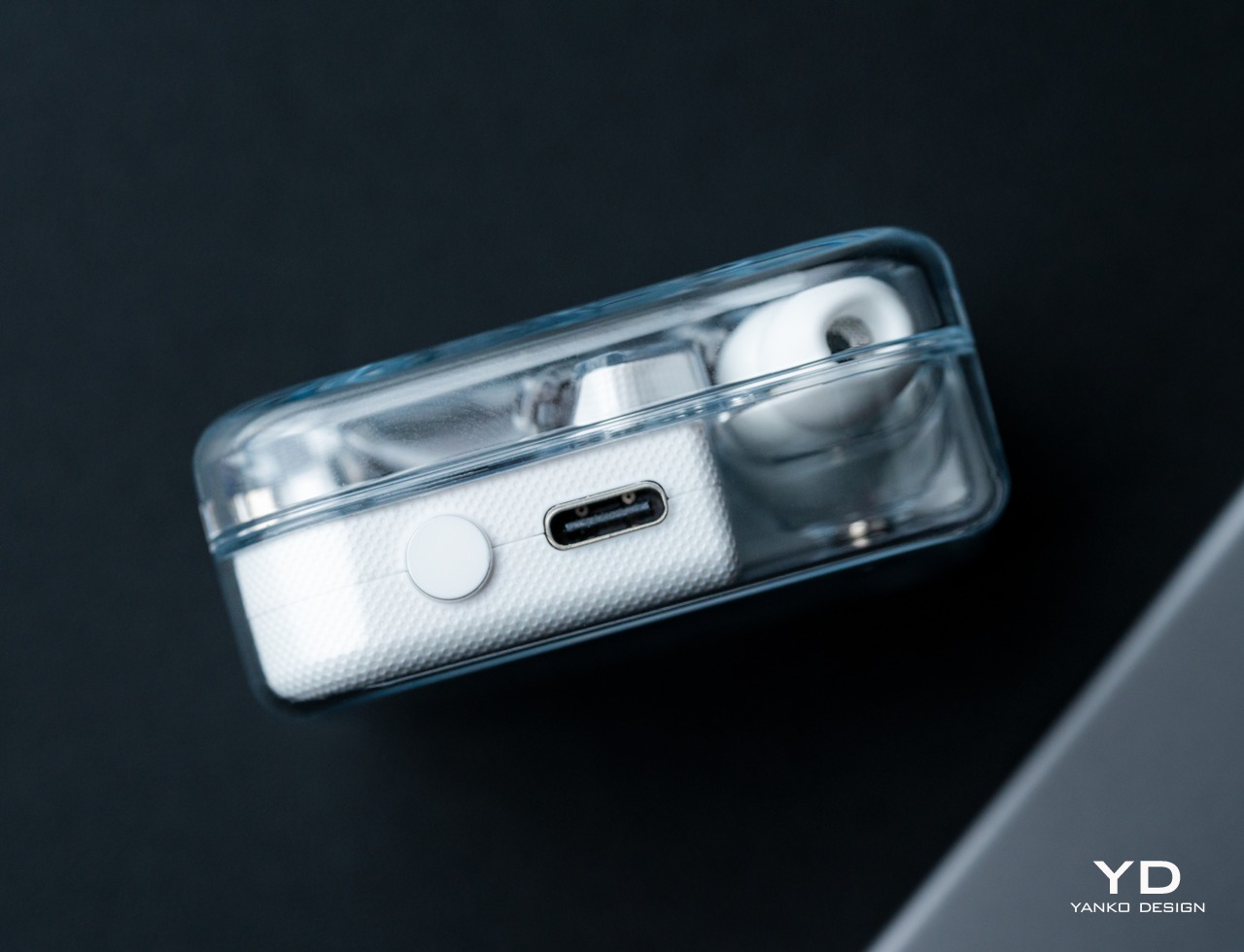 The Nothing Ear(1) costs $99 and is easily one of the most affordable TWS earbuds in the market. That alone might already convince some to try a pair, but its value goes beyond the tag. You aren’t getting what you pay for because you are actually getting more.

While ANC isn’t the top of its class, few $99 buds can boast of even having that feature. Audio quality is also decent and should be enough to satisfy the average music lover. It doesn’t have all the bells and whistles, for sure, but you probably won’t expect that from a $99 pair anyway. Unfortunately, that price tag also makes it feel like the buds are disposable, which doesn’t do well for its impact on the environment. 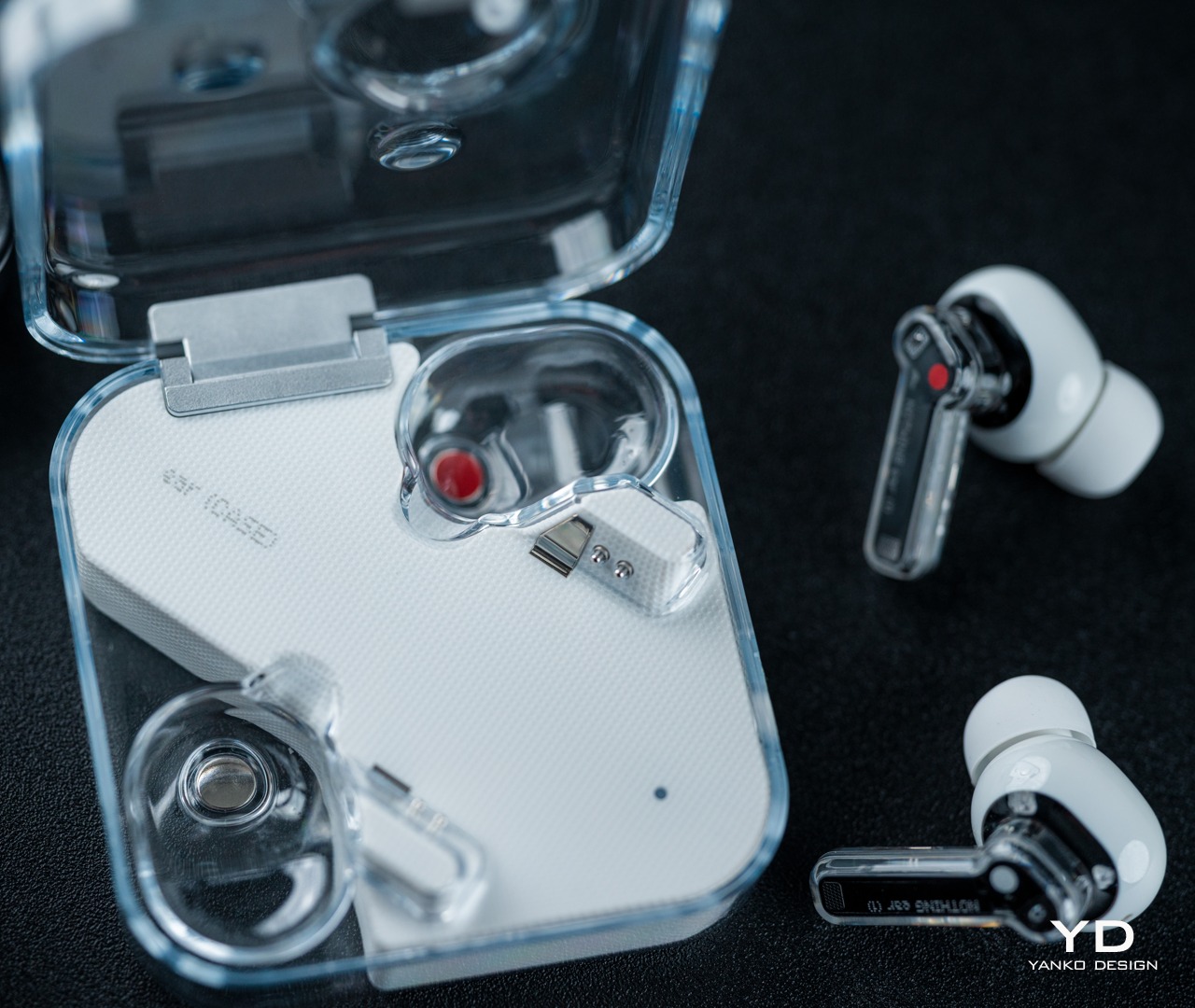 The Nothing Ear(1) is a rather surprising first product for a man whose name has been associated with one of the most successful smartphone startups in recent history. Just like how OnePlus used “Never Settle” as its battle cry, Nothing is making “Transparency” as its prime directive. The design definitely conveys that, but the Ear(1) is, fortunately, more than just a pretty face.

It is far from being the best in class, but Nothing really packed quite a whopper inside a $99 package. The company’s goal of breathing new life into the consumer tech market falls a bit short, though, especially in blazing a trail for sustainable products. The good news is that the company is at least aware of those shortcomings and is steering its ship in the right direction. For a first try, the Ear(1) is definitely nothing to laugh at.

2022 Comeback Tours – Which Artists Are Touring This Year? 0

Meet The Characters Of “The Sound of Magic” 0